Art has a very high status in modern societies: People flock to museums and artworks fetch record prices. But our age is also oddly reluctant to say in clear terms what art might actually be for. An odd mystique surrounds it, epitomized by the puzzlement many of us feel as we look at yet another odd looking, modern work of art in a contemporary museum. We’re often left quietly and politely wondering what is it all meant to be about.

For most of history, this kind of question didn’t arise, because it was abundantly clear what art was for. The question mark over the purpose of art is really a modern one, so let’s go back in time and find out about a wider range of options that we might be able to draw on fruitfully today. Rome, 290 AD Deep below the imperial Roman city, the faithful secretly gather in catacombs, or burial chambers, to celebrate new religious figure, Jesus Christ. Christianity, though still in its infancy and ruthlessly persecuted by the Roman authorities, is rapidly gaining ground.

Like so many religions before it and since Christianity has become involved with the making of art. Here, an unnamed and not especially talented artist represents Jesus healing of a bleeding woman, an incident recorded in the New Testament. Like all religions, Christianity is using art for a clear and understandable purpose: to make its message more resonant, emotionally attractive, and popularly appealing.

Art is a kind of advertising for its ideas. Soon Christian artists are going to dominate Europe. For almost a thousand years almost all art produced in Europe will simply be Christian art. From humble beginnings in a subterranean prayer room, Christian art will go on to produce extraordinary cathedrals, paintings sculptures and celebrating and enhancing the prestige of its messages. Thailand, 15th century An unknown craftsman finishes a statue of the Buddha.

One of many hundreds of thousands of such statues produced over the centuries in Southeast Asia. The purpose of such art is extremely clear: You’re meant to look at the Buddha and take inspiration, becoming a little more as he is. The sculpture is an invitation to calm and contemplation. In the East as in the West arts function is evident: to support the truths set down by religions, to make ideas more easily digestible. Paris, January 1801 The French artist Jacques-Louis David finishes “Napoleon crossing the Alps”.

It commemorates a moment when a couple of years before, Napoleon still in his twenties launched a lightning raid on the North Italian states, winning a series of astonishing victories. In the picture, Napoleon masters a white warhorse though he actually crosses the mountains on a more serviceable mule. Here, art is doing something it has done throughout history as well: acting as propaganda for a political cause.

Napoleon is looking back to the example of Louis XIV of France who did a lot of propagandizing with art. It was a habit he got into throughout his rule. Paris, 1833 The poet, novelist and critique Théophile Gautier publish an essay about art, which argues that art must free itself from the poisonous agendas of religions and governments. The point of good art is always to be just for its own sake as he put it in French, “l’art pour l’art”, art for art’s sake.

This doctrine of art for art’s sake becomes the motto of the new generation of romantic artists who set themselves against the old ideal that art should serve religion or powerful rulers or nations. Nonsense, says Gautier, true art must serve nothing at all. it is an end in itself and doesn’t try to change or do or speak about anything. Artists set themselves apart from the bourgeois commercial society growing up all around, which is always trying to sell people things.

Art should try to inhabit a loftier, more abstract realm. New York, 1917 The artist Marcel Duchamp prepares to exhibit his latest work at a show by the Society of Independent Artists. It is surprisingly a urinal titled simply Fountain. Duchamp is a rebellion against many notions of what art is, that it should be easy to understand, that it should make sense, that it should promote something.

The true artist argues Duchamp must defend himself against any confusion with advertising, mass media, government propaganda or religious indoctrination, that true purpose of the artist is to stand outside the mainstream and create works that are enigmatic, mysteriously provocative and rather silent. New York, 1949 A Russian émigré artist, Marcus Ravkovic who has renamed himself Mark Rothko to escape anti-semitism exhibits a new range of works at the Betty Parsons Gallery in Manhattan.

They are a revelation, in that they seem not to be about anything. They are about pure color fields and are as abstract as music. For some, they are the greatest works of the 20th century and soon fetch enormous prices. The Museum of Modern Art acquires a major set of Rothko’s as do other national museums around the world. Rothko becomes representative of the more obscure direction of 20th-century art, highly appealing to an elite who will often pay enormous incomprehensible prices for works but the puzzle for the wider public.

Venice, June 2005 The world’s most prestigious art fair, The Venice Biennale opens at the newly restored spaces of the Arsenale. It has been curated for the first time by two women, María de Corral and Rosa Martinez. 41 artists are shown from all over the world. The nearby Marco Polo airport is filled with the private jets of the world’s billionaires, many of whom profess to love art.

Elaborate cocktail parties are held late into the night. Art has become a playground for the super-rich as well as an obligatory tourist destination for weary travelers. Art is both hugely revered and yet somehow still in question. For most of its history art has been saddled with a mission: to glorify religion or to speak well of the state. Modern art was the result of a swerve away from these agendas for extremely understandable reasons.

Yet if art is to regain its true centrality it should overcome it hesitation about stating what it’s really for and is trying to do. It is really and has always been a sophisticated tool, a tool that can help us to cope with things like loneliness, that can fill us with hope, that can help us to communicate our inner world, that questions power and aims to improve political systems. It is never an insult to ask art to do things for us, to be a practical part of our daily lives. We honor art most when we give it the highest task of all: to help us to lead better lives. 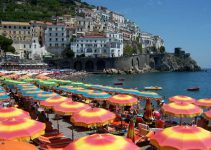